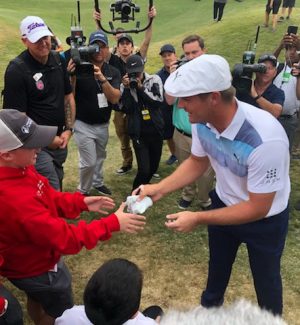 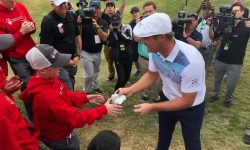 Bryson DeChambeau signing his glove after winning the tournament to give to Connor! He remembered him from John Deere Classic!

November 1-4. Connor was invited to Las Vegas! Each Shriners Hospital chooses one patient to represent their hospital at the PGA Shriners Open Tournament in Las Vegas.

Connor walked the course as a Standard Bearer with golfers for three days; he was partnered with golfers  J.Spieth, A.Ancer, C.Champ, C.Hadley, R.Tway, R.Palmer.  He followed their footsteps on the fairway, the greens and the tee boxes! As though the golf experience with professionals was not enough excitement the networking experience with the patients from the other 20 Shriners Hospitals was priceless. Connor spent early mornings until late night (early mornings a few nights) sharing stories about their experiences at Shriners. We have made life time friends who we all keep in touch with night weekly both as parents and the kids!