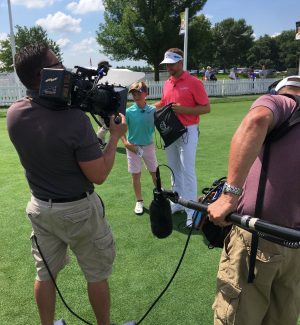 July10, 2018. Connor had the opportunity to play a hole on the TPC course at the John Deere Classic with Brice Garnett! Garnett and Connor chatted up a storm while they golfed as though they were life long buddies, talking about sports, fishing, being on a pontoon boat, Cubs, etc..it was great! He was such an amazing man! After they played the 18th hole Garnett took Connor to the driving range with all the other professionals, include B. DeChambeau who was right next to them. Garnett finished his lessons with Connor on the practice green challenging Connor to a variety of putting contests. The day ended with Connor and Garnett being interviewed by numerous local news channels and the Golf Channel, of which a segment was aired the championship day. It was a life changing day! Connor and Garnett keep in touch to this day and Connor is following him on every tournament!